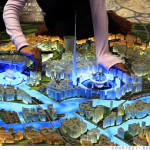 (Fortune Small Business) — Edward Leftwich loves to show visitors around the Mohammed Bin Rashid Gardens. It’s a massive 4,000-building mixed-use project that he just finished constructing for a client in Dubai, complete with hundreds of waterways, roads, and parks. But you don’t have to fly to Dubai to see it – the miniature city fits inside Leftwich’s office in Atlanta.

Leftwich, 51, is the CEO of Real Model, a company that creates scale replicas of projects for real estate developers. The replicas can fetch several hundred thousand dollars.

Rather than rely on the troubled U.S. real estate market, Real Model expanded its operations to Dubai, financial capital of the Gulf region. Since opening an office there two years ago, Real Model has seen annual revenues shoot up from $200,000 to nearly $2 million.

Founded in 1985, the company won lucrative contracts during the 1990s housing boom. It built replicas of the Augusta National Golf Course, the Trump (TRMP) Towers in New Orleans, and Atlanta’s Olympic facilities. But Leftwich was always wary of a slump.

“One market isn’t a feasible business model,” he says. “You have to be ready when it stops performing.”

In 2006, just as the U.S. building boom started grinding down, Leftwich took a trip to Dubai. The large-scale projects he saw convinced him that the future of real estate lay in the Gulf. Real Model promptly opened a second office in Dubai, hiring 18 local employees. (He still has a staff of eight in Atlanta.)

The bet paid off: Real Model’s Middle Eastern sales have soared, while the company’s U.S. business has stagnated. The company recently landed deals with major firms such as Emaar, Nakheel, and Dubai Properties.

“In many cases architectural modeling is being replaced with sophisticated computer programs,” says Ian Rusk, executive vice president at Zweig White, a construction research firm in Boston. “But replicas are still widely used for high-profile projects, which are concentrated in Dubai.”

Real Model’s replicas are filled with meticulously crafted touches such as layers of laser-cut Plexiglas, each less than a thousandth of an inch thick, and tiny pedestrians with hand-painted faces. Customers can control hundreds of LED lights via a touchscreen remote. Such attention to detail is how Leftwich aims to compete with his rivals in Dubai, who increasingly outsource their models to China.

“The Chinese prices are lower,” admits Reza Khalili, founder of Dubai-based model maker I-CAM. “But the quality isn’t as good.”

Leftwich hopes to open another office next year in Abu Dhabi – the next hot spot for tiny buildings.

We'd love to hear from you! Send us a quick message below.