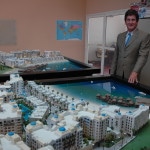 Edward Leftwich is a man who thinks small.

Leftwich, CEO of Real Model Inc. in Atlanta, and his wife, Nikki, are, in fact making a living thinking small — and building scale models for developers in town and around the world.

Leftwich recently opened an office in Dubai, United Arab Emirates, for projects that he says are doubling his annual revenue.

And it’s the Middle East work that will tide him over as the U.S. economy works through its downturn, Leftwich said.

Real Model is currently making models for one of the largest commercial projects in Dubai, which will be a mini-city built out in the desert and will include 11,000 buildings. Just the models for the project are topping $300,000 for their size and detail. The project, being done by Dubai Properties, has not been announced yet, Edward Leftwich said.

Leftwich opened an office in Dubai in 2007, without having a project in hand, but he’d been thinking about opening an office there since 1999. Dubai has seen tremendous real estate growth in the past 10 years, including the new Burj Al Arab, the world’s tallest hotel, and Leftwich saw the potential there. He’s planning an office in Abu Dhabi as well by the end of 2008 at the request of some developers there.

“And this is a way for us to diversify ourselves to face the [real estate] downturn we are in now,” said Nikki Leftwich, vice president of sales and marketing.

“It’s a big challenge to run an office 10,000 miles away,” Edward Leftwich said. “I’m on the phone two hours every day.”

But the Dubai office, which started out with four employees, now has 18, more than the 14 employed in Real Model’s Atlanta office. Revenue for the company was not disclosed.

“Fifty percent of our work is over there,” Nikki Leftwich said.

A South African native and architect by trade, Leftwich came to Atlanta in 1985 to work with real estate icon John Portman. He formed Real Model when he realized building a successful architectural firm would be difficult without being well-connected “and I didn’t have that,” he said.

So Leftwich began making scale models for developers, mostly office buildings in the early days. Building scale models led “to meeting a lot of people I wouldn’t have met otherwise.”

For example, he met people designing an aerobic step bench and in 1989 helped design what would become the Reebok Step. That success helped tide him over during the real estate malaise in the late 1980s and early 1990s, he said.

Despite the real estate slowdown today, Leftwich has work in Atlanta. He built the five-foot scale model of CityPlace, a joint venture Buckhead condominium project between The Related Group in Miami and Atlanta-based  Cousins Properties Inc. (NYSE: CUZ).

Leftwich has done nearly all of the scale model work for  Novare Group Inc. and Wood Partners LLC, including the models for ViewPoint, Trump Towers Atlanta and The Atlantic, all in various stages of construction or pre-construction.

Leftwich just finished the nine-foot model for the 70-story Trump Towers New Orleans and is hopeful he can work with the Trump organization again.

Leftwich smiles when he talks about early models, done by hand with a table saw. Computers and lasers have made things easier, but there is still a lot of minutiae to the work, including adding miniature trees, cars, flowers, bushes, people and working lights in the model.

“Even with the best pictures and renderings, it’s hard to get people to understand what the building looks and feels like,” Randall said.

Models, once maybe a nice thing to have with the project, have become a necessity for the projects that are going to take two to three years to build, Randall said.

Models are not inexpensive, he said. The Trump Tower Atlanta model cost about $55,000, he said. “But when you look at the benefits to the sales department, they are probably the most cost-effective part of our project.”

The model for Eclipse, for example, had a touch screen so if a buyer wanted to see where unit 2306 was on the model, 2306 would light up. Real Model’s depiction of Novare’s 360 project in Austin rotates and lights up.

“You need to show the customer what the finished product is going to look like, and scale models are invaluable,” Kritzman said.

The CityPlace model, about $60,000 to build, lights up and is fully landscaped with miniature people, which cost $1.50 each.

“We’re pushing the envelope on technology,” Leftwich said, and reinventing the way models look and perform.

With all the attention to detail, there is still “the joke” that model makers love to insert.

Kritzman recalls the joke in the Eclipse model: a miniature mailman with an equally miniature dog nipping at his heels. “We always look for the joke in our models,” he said.

We'd love to hear from you! Send us a quick message below.